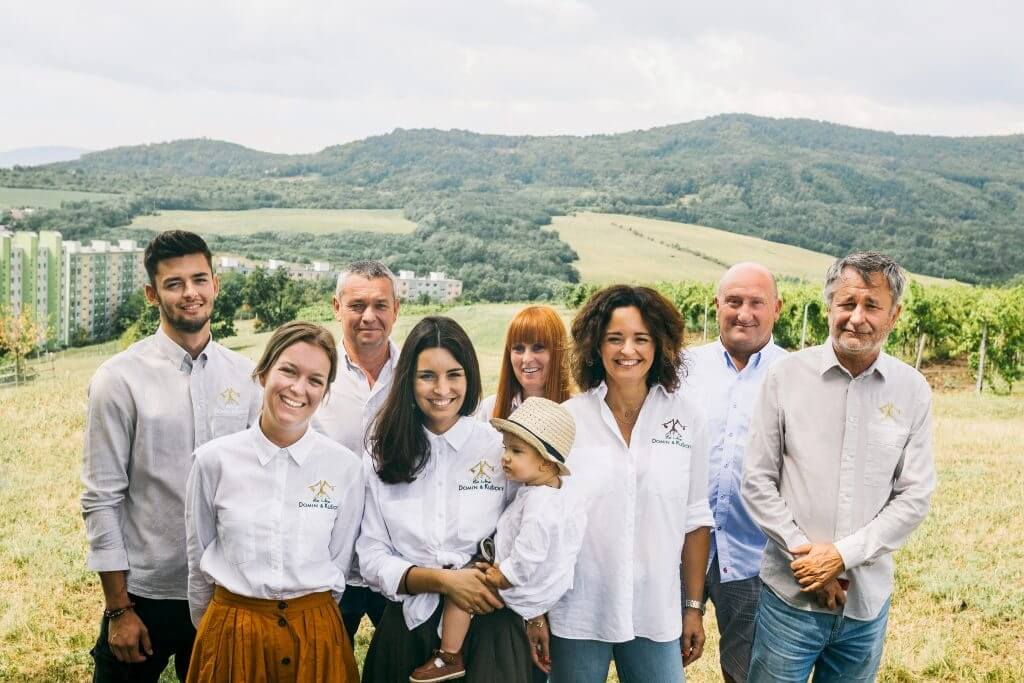 In 1996, when Ing. Jan Domin founded our winery his vision was clear:

„HONEST WINE-MAKING SHOULD BE ORGANIC…“

After years of experience in the field of grapevine cultivation and wine-making, Ing. Jan Domin decided, in the 90s, to put the acquired knowledge to use in his own family winery. He was actively partaking in running the wine business up until 2017. He was trying for wine terroir with a soul and wanted to share his wines with good natured people. His ambition went hand in hand with a clean environment, with no trace of chemistry and pessimism. He sought to achieve harmony and elegance in the cultivation and wine production. He didn’t consider the word “BIO” as a marketing label, but rather, as a necessity, that is, if you are truly serious about wine tasting. He didn’t want to describe the wines with words, he thought it better to let them speak for themselves. Today, the winery is run by his daughter Diana and son-in-law Tibor.

„He didn’t consider the word “BIO” as a marketing label, but rather, as a necessity, that is, if you are truly serious about wine tasting“

I think that my life path might have been already determined on the day I was born. It was on Saint Urban’s day, the patron saint of wine growers. Ever since I was a little child I was always surrounded by vineyards, conversations about wine and wine growing. In 1997 I started working in the family winery that my father had just founded. I am thrilled about the idea of organic approach to wine-making and vine-growing. Me and my husband actually planted the first organic vineyard in Slovakia in 1998 at Katovka plantation in the region of Modry kamen. Today, I am mostly handling the administrative and commercial side of our business. I consider it a blessing to be able to work at a job that I love, that fulfils me and enables me to put my dreams and visions into reality.

I grew up in a village with a fitting name called Vinica, which means “vineland” in Slovak language. Understandably, everyone who lived in this village, located in the south of central Slovakia, owned a piece of vineyard and made their own wine. My family was no exception. I started working in the family winery in 2001 and from the very beginning i was in charge of planting new vineyards and the cultivating process in general. After the harvest, I am in charge of the work process in cellars. It’s here that ideas and visions are being born and turned into delicious organic wines. We bottled our first organic wines together with my father in law and my wife after the successful vintage of 2001.

My focus in life has always been on the art but I have also been affected by the environment I grew up in. As a child, I would spend weekends in the small family vineyard, and later, as a student, I would work in the winery during summers. Winegrowers’ and winemakers’ work encompasses many different aspects. As a nature lover myself, I am very glad that we are treating it with the utmost respect and appreciation and that we are able to take active part in its protection and landscaping. I studied design at Slovak Technical University. I am in charge of the marketing activities of the family business. You can see my creative signature on every wine bottle label and promotional materials but also in the interior design of the winery. I am always more than happy to take part in the creative process of photo shooting our products as well as creating and managing our social media content.

In 2019 I graduated in viticulture and winemaking from Mendel University in Brno. I was already working in the winery during my studies. My vision for the future of our business is to eventually get the biodynamic certification, and besides that, I have many other goals in mind too.

I grew up in a region with a long-standing tradition of viticulture and winemaking. My family environment has always revolved around vineyards and wine making, even if only on a smaller scale in the beginning. Later, during my studies, I also took part doing summer jobs in Domin & Kusicky vineyards. Now I work in sales and presentation of our organic wines and take care of our customers, especially in Bratislava region and its surroundings.

There is nothing more rewarding in life than having a job that is also a hobby at the same time. I am very fortunate that it is my case. I am the company’s sales director. I sell our wines, conduct business negotiations and arrange business agreements. You can spot me at almost every wine fair, on wine routes and wine tastings.

I am facilitating sales and presentation of our exceptional wines on an international level. The “wine road” is a long one, not only from vineyard to a cellar but also to international market waters. I really enjoy the run.

Natural environment and climatic conditions of Velky Krtis region have enabled the cultivation of vineyards as early as the Middle Ages. No direct written records have been preserved. However, our plantation “Na vinicke”, located above the upper periphery if Velky Krtis is very important to us, as it was mentioned as early as the 14th century.

„If wine is to be the image of nature, “a living and breathing” nectar reflecting the unique character of the place it was born in, the winegrower and the winemaker should always respect its nature“

The legend of Noah
According to the legend, Noah was a hunter who would supplement his diet with fresh fruit. He found out that the sweetest of fruits were the grapes from vines that grew wild in the forrest. The season of consumption only lasted a short period of time and the fruits themselves did not last long either. As he wanted to enjoy the sweetness of it longer, he squeezed the grape juice into the dried pumpkin. After some time passed, the winter came and there was no fresh fruit anymore, he remembered the pumpkin. After the first gulp, he grimaced and shuddered, he was disappointed. But with each gulp the taste became more and more pleasing to him. The warmth spread through his body and he started laughing, singing and dancing. The others thought him to be mad, and later, when he dropped to the ground like a sack of potatoes, they thought he was poisoned. However, he slept it off and was as good as new the next morning. Then his fellow tribesmen decided that they also wanted a taste, they wanted the Gods of good spirits to enter their bodies as well. And just like that, the wine was born …

is an established name in the wine-making community and it surely not a coincidence. Vineyards and wine-making were his destiny. He was born into a family of vine-growers and after graduating from University of Agriculture in Nitra, fate took him to a forgotten region of Velky Krtis boasting with its unspoiled nature. He was the chairman of one of the largest and most successful vine-growing and wine-making companies in Czechoslovakia – PD Nenince, where he started working already at the time of its foundation. He later left to work for the Slovak Ministry of Agriculture.

In 1989, he founded his first company Natural Alimentaria that focused its activities on ecological agriculture. Natural Alimentaria was coordinating processes like mentoring, manufacturing, control checks, processing and trading of organic agricultural and alimentary products for the client companies. In 1996, Jan founded NATURAL Domin & Kušický and so fulfilled his dream of establishing a family winery. And not just any winery – his philosophy rested on understanding of nature and he dedicated his work to organic viticulture and organic wine production.

2001
Construction of a cellar

This e-shop is intended exclusively for persons over 18 years of age.
Are you over 18?